We are taking this opportunity to recognize and thank Nicolas and Max Salmon. Over the past three years we have had occasion to engage their services for three different funerals. In each instance they went over and above our expectations to help our family through difficult times. Repeatedly they were innovative to help with special requests, were willing to accommodate regardless of the circumstance, and above above all rendered these services with a high degree of professionalism and empathy. In addition, we felt that we received excellent service for dollars spent.

“Our experience was one of caring, compassion, honesty, affordability, and they definitely went the extra mile in several areas, for which we are so grateful. It is comforting when tragedy strikes to know someone you can trust. Thank you Salmon and Sons.”

“Our family is so grateful to the Salmons at Salmon and Sons funeral home for their kind and compassionate care. When grief struck, it was wonderful to put our trust in someone who was looking out for what is best for our family and respecting dads wishes. We cannot say enough Thankyou’s to the Salmons for their amazing service.”

We are always interested in hearing from the families that we serve.  Please take a moment to let us know how well we served you in your time of need. We very much appreciate your feedback.

Newspaper Article from the Lethbridge Herald on Sunday October 30th, 2016

It’s a new facility, but a well-known name.

After months of renovation and construction, Max Salmon and his son Nicholas have opened a new funeral chapel for Lethbridge-area families.

Located at the entranceway to the Lethbridge Airport, the Salmon and Sons chapel offers a full range of services. As a family business, it offers many years of experience helping southern Albertans as they face a difficult time.

“We want to offer an honest and caring service,” says the younger Salmon.

That’s been the Salmon family’s approach, he says, since grandfather Robert Salmon began serving the community in the late 1950s. His father Max has more than 50 years experience in the profession – and Nicholas remembers helping out by washing funeral cars as a young teenager.

His technical training came later, after university and world travels that included a stint teaching English as a second language in Korea alongside his wife, Allison.

Back in Canada, he studied at the Canadian College of Funeral Service where he earned its award for embalming technology. Then he started saving to open the business, working on oil rigs, construction and other jobsites in recent years.

His most important job this year, however, was redeveloping an airport-related building that’s served many purposes over the decades. While local trades people took care of the mechanical upgrades, Nicholas handled many of the other tasks.

The welcoming facility now offers a 150-seat chapel, a family room with a kitchen, an arrangements room and other amenities. Outside, there’s a large parking area.

“We serve all faiths and religions,” and Nicholas points that’s increasingly important in a city that’s now home to families from many more parts of the world.

“Everyone has their own way to grieve.”

While many families prefer cremation, he says Salmon and Sons also provides traditional funerals with a casket, church service and graveside commitment. As with all funeral directors registered in Alberta, the new funeral home is able to arrange burial as well as the memorial or funeral service in other locations across the region and beyond.

If desired, he adds, families can begin the arrangements process at home. For children and others who wish, Salmon and Sons also offers a “comfort dog.”

An important part of its service, “after care” like assisting with the unexpected paperwork that families face, like cancelling memberships, dealing with real estate questions, or filing a special income tax statement.

The Salmon family’s service has earned the respect of southern Alberta families, he says. As a new generation takes its place, Nicholas Salmon says he’s determined to honouring that reputation. 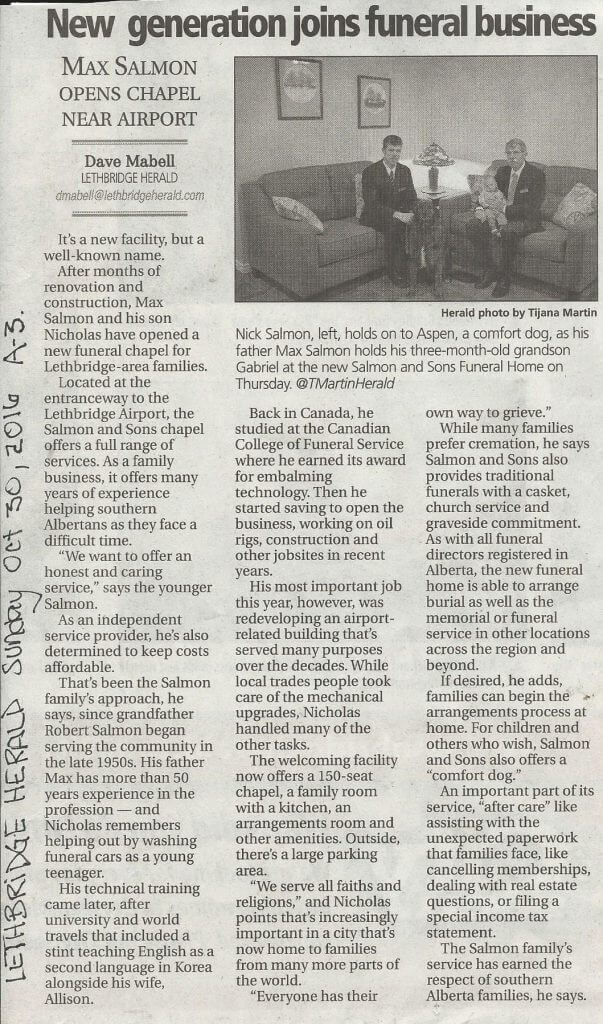